NTFC Supporters Trust was formed following a public meeting held at the Exeter Rooms in Northampton on 2 January.

The meeting was attended by more than 600 supporters and had been called by a group of ordinary fans which included Brian Lomax and Rob Marshall, editor of the fanzine What A Load of Cobblers.

The group had become concerned by an apparent financial crisis at the club and a series of misleading statements issued by the then chairman, Michael McRitchie.

At the meeting, it became clear that the club had debts of £1.6 million and that unpaid bills stretched back several years, to the time of the previous regime at the club.

The crisis, however, had been precipitated by the club's failure to pay the players' wages for two months running - this amounted to about £64,000 and The Professional Footballers' Association had to cover this, meaning that the PFA had also become a creditor of the club.

The Trust had been set up with two clear objectives.

First, to raise money to save the club (but not for the then current regime) and be accountable to the supporters for the expenditure of that money.

Second, to seek effective involvement and representation for supporters in the running of the club, in order to ensure that such a crisis situation would never occur again.

In the latter respect, the Trust marked itself out as being distinct from normal supporters' clubs, in that from its inception it has had an inescapably political dimension. By doing this, the Trust was a forerunner of a variety of independent supporters' associations and other similar bodies who have since sought to change the way that their clubs are run and how they relate to their fans. 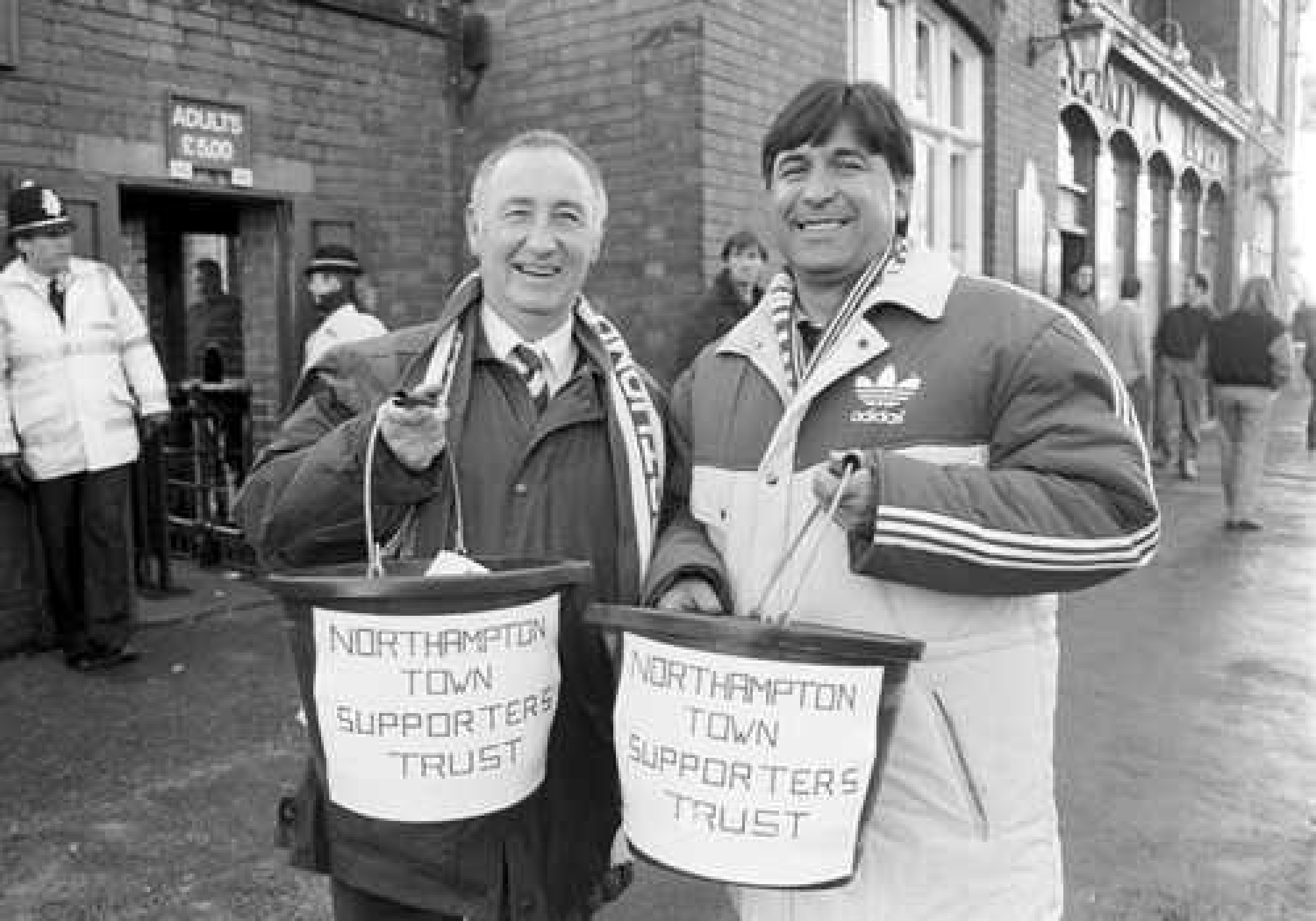 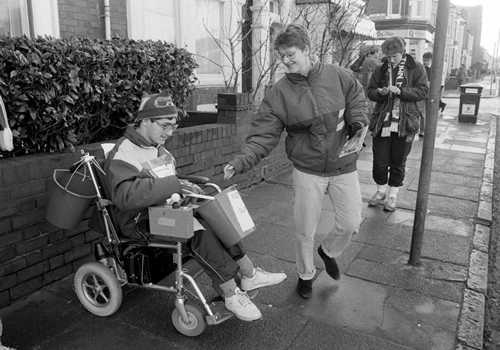 The Trust's initial strategy was a dual approach: campaigning for change and fundraising in public, whilst negotiating in private with the club's creditors, former directors, the Football League and the Professional Footballers' Association.

In this way the Trust was able to establish its credentials within the first three months to play its part in the running of the club.

The Trust's publicity campaign met with almost universal support from the public and the media. Fundraising efforts began spontaneously in pubs, clubs and workplaces, and dozens of individual donations ranging from £1 to £1,000 were received. A bucket collection at the first home match after the Trust was formed yielded £3,500, over £1 per head of the gate.

This particular occasion became immortalized locally by the chairman's attempts to evict the collectors from the ground in front of television cameras.

In the eyes of supporters, this only added to the legitimacy of the Trust and its members, and the bucket collections continued successfully for the rest of the season.

The private negotiations were aimed at bringing a winding-up petition against the club in court.

Strange though it may seem that loyal supporters might take such drastic action, the advice we received was that this was the only way to wrest control from the chairman. The Trust could not, of course, bring the petition itself, because it was not a creditor of the club, so we had to persuade others to take this course.

The company that eventually did so was Abbeyfield Press Limited, the club's programme producers, who were owed more than £11,000. Abbeyfield was owned by Tim Vernon, himself a lifelong supporter, and his partner.

Despite pressure from various quarters, they stood firm and went ahead with the action. When the petition was brought, the chairman was granted an eight-week adjournment on the basis of preparing a 'rescue plan' for the club.

This was worrying because it would have taken until the end of the season when, with fixtures completed, the Football League would have had much less incentive to help keep the club going.

For a brief period it appeared that the club's only future lay in the route already taken by Aldershot Football Club, which found that after the old company folded in 1992, and a new one formed, the team itself had to resume playing five divisions lower in the league 'pyramid'.

Northampton Town's only 'assets' in these circumstances would have been the £13,000 thus far raised by the Trust, and the right to continue playing at the old County Ground. This ground no longer even met Southern League Premier Division standards.

The chairman's 'rescue plan' collapsed within days and shortly afterwards he called in administrators to run the club.

On his own admission, he thought that by doing this he would obtain a year's breathing space, and then return to run a club free of debt.

Barry Ward, the administrator, took a different view. He first had to obtain an Order of Administration from the High Court and in order to do so had to convince the court that the company was capable of returning to solvency and normal trading within a reasonable period of time.

His two main pieces of evidence were the continued interest of former directors, and the volume of public support as evidenced by the formation and rapid growth of the Trust.

The Trust, meanwhile, was continuing its public work through fundraising, bucket collections and open meetings.

The club chairman was asked to leave and the former directors, who had been sacked by the chairman, returned to the board alongside two Trust representatives – the Trust’s chairman Brian Lomax and Phil Frost. Another Trust member, Barry Collins, took on the role of company secretary.

The vast majority of the club’s playing staff and management team had their contracts terminated and the club fielded a team made up largely of youth team players for the remainder of the season.

The club, with a transfer embargo in place, clung on to its place in the Football League by the skin of its teeth, winning a do-or-die game at Shrewsbury on the final day of the season.

The club’s Football League status was placed in even greater peril, the team finishing bottom of the basement division following a 4-0 defeat at Chesterfield – amazingly, their status was preserved because the top team in non-league football, Kidderminster Harriers, had a ground deemed not fit for Football League purposes. The irony was that Kidderminster’s Aggborough ground boasted better facilities than Northampton’s County Ground!

The arrival of manager Ian Atkins brought an upturn in the team’s fortunes and off the field the club strengthened steadily through prudent chairmanship from the administrator Barry Ward, regular financial contributions from the board and money raised by the Trust, which was given to the club in return for shares.

The club reached a Wembley play-off final and won promotion to the third tier of the Football League with a 1-0 victory over Swansea City at Wembley. The club had fostered an excellent spirit between board, staff, players and supporters and the result was there for all to see.

On the same day as the previous year, the club again reached a Wembley play-off final, this time bidding for a place in the second tier. On this occasion, the team was defeated 1-0 by Grimsby Town.

The bubble burst on the field with the team slipping back to the fourth tier following a disappointing relegation. Brian Lomax stepped down from the club’s board directors and resigned as Trust chairman after seven years at the helm.

The team saw in the Millennium on a high, bouncing back to tier three on the back of a successful led by new manager Kevin Wilson. Brian Lomax spread the supporter stakeholder gospel at the highest level of the football and political worlds, influencing the then Labour Government to such an extent that Supporters Direct was founded as a movement to spread the word nationwide – democratically-elected Trusts or other supporter organisations are now commonplace throughout football and the model has been adopted by supporter groups within other sports.

Fraudster Giovanni di Stefano took an unhealthy interest in the club and fortunately his advances were resisted. A bid by former England star John Fashanu to buy the club also failed. Trust organises bucket collections with club in financial difficulty once again.

The arrival of David Cardoza as club chairman after brief spells at the helm by Andrew Ellis and then Ken Good.

After two seasons in the third tier, the team is once again relegated.

The team loses in the play-off final at Wembley, going down to a heavy defeat against Bradford City. A new agreement is reached between Northampton Borough Council and Northampton Town FC which gives the club long leasehold rights at the stadium and land adjoining the stadium. The council holds the freehold to the stadium. The council agrees to loan the football club up to £12 million to re-develop the east stand at Sixfields, and land behind it. The place on the club’s board for the Supporters Trust, guaranteed for 23 years back in 1992, is not included in the new agreement.

It becomes clear that the east stand development at Sixfields has stalled and that around £10 million, handed over to developers working on behalf of the football club, has gone missing. The Trust’s We Want Answers campaign rings alarm bells and a police investigation into the missing money gets underway. The chairman David Cardoza is forced to sell the club to new owner David Bower who appoints Kelvin Thomas as club chairman to represent his interests.

On the field, against all odds, the team managed by Chris Wilder wins the League Two title by 13 points.

The east stand at Sixfields remains unfinished, in spite of a clear understanding on takeover that money was available to complete the work. The club pointed out that the council had not forwarded the required paperwork to enable the building work to start.

The Trust raised the matter publicly and the council resolved the matter at a summer council meeting. With several EFL football clubs experiencing financial difficulties, the Trust board voted to explore a viable community ownership for the Cobblers as a ‘rainy day policy’.

It became clear that the football club was now looking to tie in the development of the east stand together with wider negotiations over other leasehold land at Sixfields. The council insisted that first and foremost the east stand needed to be finished. Accordingly, dismayed that the club was again being held back by wider issues concerning land negotiation, the Trust held a successful public meeting at the Park Inn hotel to test the water for future community ownership. The Trust intends to present its plans to its membership at the annual general meeting in November.