New Trust board member Bob Clarke - of Duston, Northampton - attended his first meeting at the start of the month.

Bob is a season-ticket holder at Sixfields and is a life member of Northampton Town Supporters Trust.

Bob has extensive experience of and expertise in the world of business and we wish him a happy and fulfilling time on the board.

The next board meeting will be held on Wednesday 5 February - any Trust member is welcome to attend as a guest but should make a formal application to Helen Hickman via email ntfc_trust@outlook.com

Andy Roberts, Helen Hickman and Trina Smith were guests of Exeter City FC for the Cobblers visit at the beginning of December.

The trust guests were given a tour of Exeter's St James Park stadium, a glowing reflection of a 100 per cent community-owned club that works so hard on behalf of its supporters.

We would like to publicly thank Elaine Davis, Nick Hawker and the other Trust officials for their generous hospitality and for making the visit so special.

We look forward to welcoming four members of the Grecians Trust to Sixfields next month when we sponsor the home match with Exeter.

The Trust is hoping for a meeting with NTFC officials within the next few weeks to learn more about the development opportunities at Sixfields. We will let you know once we have a meeting arranged, or otherwise.

The annual New Year Raffle will be drawn in Carr's Bar shortly after the end of the home game with Morecambe this coming Saturday.

The board received an update on the status of the east stand develoopment on the back of a Freedom of Information application to Northampton Borough Council. A media release will follow shortly. 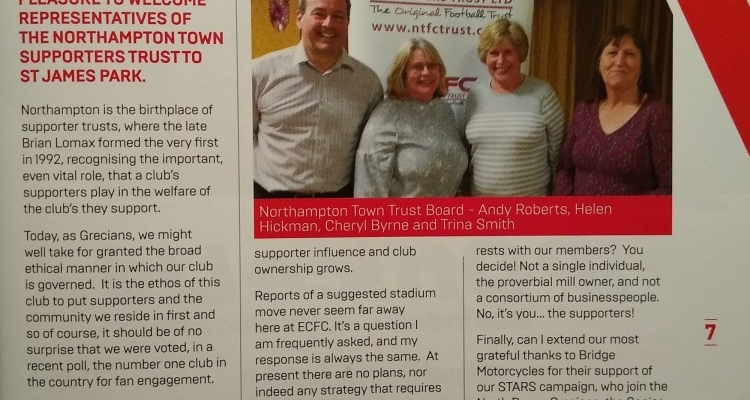