NTFC Supporters Trust is becoming increasingly concerned at the lack of progress on the east stand development at Sixfields Stadium.

Boundary line irregularities affecting land leased to Northampton Town FC (NTFC) and County Developments Northampton Limited (CDNL), by Northampton Borough Council (NBC), needed to be resolved before any progress on the development of the east stand was possible.

The Trust recently attended a meeting with NBC, represented by Council Leader Jonathan Nunn and Borough Solicitor Francis Fernandes, at which the status of the east stand development was raised.

NBC’s position is that their cabinet resolved to regularise the leases to enable the completion of the east stand at a meeting on June 13 last year and that, the day after the meeting, legal papers were sent to the football club for approval and signature.

Mr Fernandes informed the Trust that these papers have still not been signed and returned to the council and that NTFC Chairman Kelvin Thomas has been seeking to tie in wider negotiation over development land at Sixfields, unconnected with the boundary issue affecting the east stand development.

NBC were very clear in our meeting – legal approval of the boundary issue must come first, to be followed by the east stand development. After that, and only then, would NBC be prepared to enter into discussions about the future use of other leasehold land surrounding the stadium.

Councillor Nunn has stated publicly, in a radio interview on 15 March, that the council had done what it needed to do and and that the next move was down to the football club. He said: “We are in touch with the chairman and the management at the football club. We are also in a really close relationship with the Supporters’ Trust too. Technically, the next step is not the Council’s.”

When NTFC was taken over by David Bower and Kelvin Thomas in November 2015 there was a clear understanding that the east stand would be completed and we have been told by Mr Bower, as recently as last week, that funding is available for the development.

The Trust would like to offer its support to both parties so that the obstacles to progress can be identified and overcome and we look forward to the completion of the east stand to a satisfactory standard. 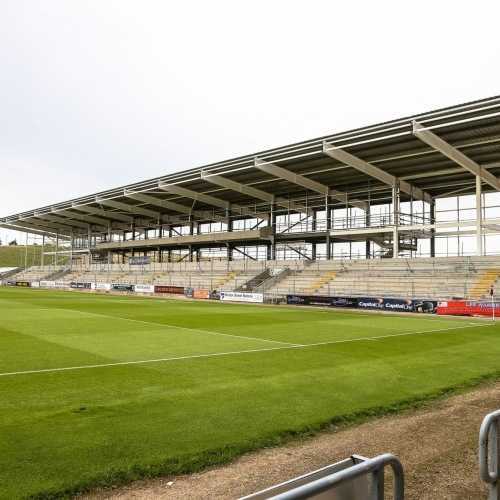