The Trust this week contacted the football club to express its concern over the condition of the Sixfields pitch.

The club has over a long period strived for better training facilities, from the athletics pitch which was never a suitable pitch, to various other temporary solutions. Going back to the 2015/16 the club would train on up to three different pitches in a week! Since that season and the change in ownership vast improvements have been made to the pitches at Moulton College through investment by the club. These being improvements to the drainage as well as securing some exclusivity of pitches and having the pitches maintained by the clubs grounds staff.

It is well known that when Keith came to the club he identified that the two pitches used by previous first team managers at Moulton College were not ideal for the environment he wanted. We therefore worked with Moulton to identify two additional pitches/areas that could be used by the first team and switched the academy to the previous first team pitches which also improved the pitches they had access to. These pitches required significant works to bring them into play and much of this work was planned for spring/ summer 2020 to bring them fully into play for the first team for season 2020/21. We had also identified an area with Moulton College to site extensive buildings that would house changing rooms, offices, physio room, a gym and canteen so that we had an area of our own within close proximity to the pitches and to enhance our training environment.

The investment for all of this runs into several hundred thousand pounds. Clearly with the arrival of COVID-19 and the severe financial challenges facing the club as a result these plans have for now been put on hold while we work to protect the short, medium and long term financial health of the club.

On Friday 13th March 2020 the EFL suspended games and told clubs to cease training. Initially this was for a period of three weeks but then became indefinably following the UK going into lockdown. Over the following weeks there was much discussion as to when the EFL season would resume with the priority being to resume games as soon as possible.

Essential maintenance was carried out during this period on the PTS Academy Stadium pitch and a mini-renovation carried out balancing the demands of being prepared to start back up with training and playing and getting the pitch into the best possible condition while not knowing if and when the season would be concluded, when the new season would start and if there would be a longer window at any point to complete a full renovation.

Initially during the lockdown the clubs grounds staff who maintain the pitches the club has use of at Moulton College had no access to the College and were therefore not able to complete any basic tasks or maintenance at this time.

As the lockdown extended it became more likely the season would not be completed. There was then an extended debate but in the end it was agreed by clubs in League’s one and two that the season would end using the points per game formula and the play-off’s would still be played behind closed doors.

We returned to train for the League two play-off campaign on 1st June 2020. All training for the play-off campaign was completed at the PTS Academy Stadium. At this time due to access restrictions the pitches at Moulton College were not in a suitable condition. Added to this we were only given permission to return to train and play during the lockdown under strict bio-security conditions. These could only be met by training at the stadium were we had complete control on access and the environment.

The play-off final was on 29th June 2020 with the final training session ahead of this taking place on the PTS Academy Stadium pitch on 28th June 2020.

As the lockdown continued although with some easements over the summer the focus turned onto when the 2020/21 season would start. The season commenced on 12th September 2020, with a cup game a week earlier on 5th September 2020. However we were told by the EFL that one option being looked at was a season commencing on 29th August 2020, again with cup games in the week prior. A final decision was not made until quite late and we therefore had to be prepared for a return to training in late July 2020.

With the restrictions we had in accessing Moulton College due to the lockdown to complete the necessary maintenance work to the pitches, plus the fact that we were and still are operating in a situation where the virus is very prevalent and we would continue to need to provide a bio-secure environment we would commence training for the 2020/21 season at the PTS Academy Stadium.

Pitch renovations are completed on a cycle over a few years. We tend to complete a full renovation where we completely take the top layer off of the pitch and reseed every three/ four years dependant on various factors. In the years in between we complete a slightly more basic renovation to varying scales dependant on where we feel the pitch is in its cycle at that time. We had planned in summer 2020 to complete a full renovation. This helps stability of the pitch and also improves the quality of surface by removing the bad grass species and replacing them with the higher quality species of grass.

A full renovation needs eight weeks until the pitch can be used and more basic ones needs around six weeks. So clearly while the majority of League one and two clubs had ample time to complete renovation works. The above factors and timescales as a result of our involvement in the play-offs in this unusual year resulted in us simply not having the time required to do the works we would want to do.

The grounds staff carried out what works they could in the very short period available to get the pitch in the best condition possible for the start of pre-season and continue to carry out remedial work and maintenance weekly to maintain the pitch to the best standard possible.

Where are we now?

Training on the stadium pitch during the summer and early autumn months if managed correctly through maintenance programmes and rotating actually has very little impact as the grass is still growing and any damage recovers quickly. In the winter months its clearly more challenging with less growth and more wet weather. However it is worth noting that in this compressed season the amount of long technical or double training sessions is much reduced, with two games a week the norm, we are going game to game with recovery and match prep being the focus.

We are now moving to the time where I expect more training sessions will take place at Moulton College when required on a pitch that is now of a good standard.

It is also worth noting that many of the comments about the pitch came after two games in particular. Firstly the Southampton U21’s EFL Trophy game and secondly the Accrington Stanley league game on Saturday. We experienced extreme weather ahead of both of these games which had a big impact. For the Southampton game we experienced a freak storm in the hours before kick off which waterlogged the pitch and in truth the referee probably shouldn’t have allowed that game to go ahead. For the Accrington game we had torrential rain in the twelve hours leading up to kick off. The restrictions on our ability to complete the full renovation this summer impacts the pitches ability to take water and drain as well as it would have done if we had been able to complete that work and in truth this and the fact the pitch is in its fourth season since a full renovation for events out of our control is having as bigger impact on the pitch as training on it is. 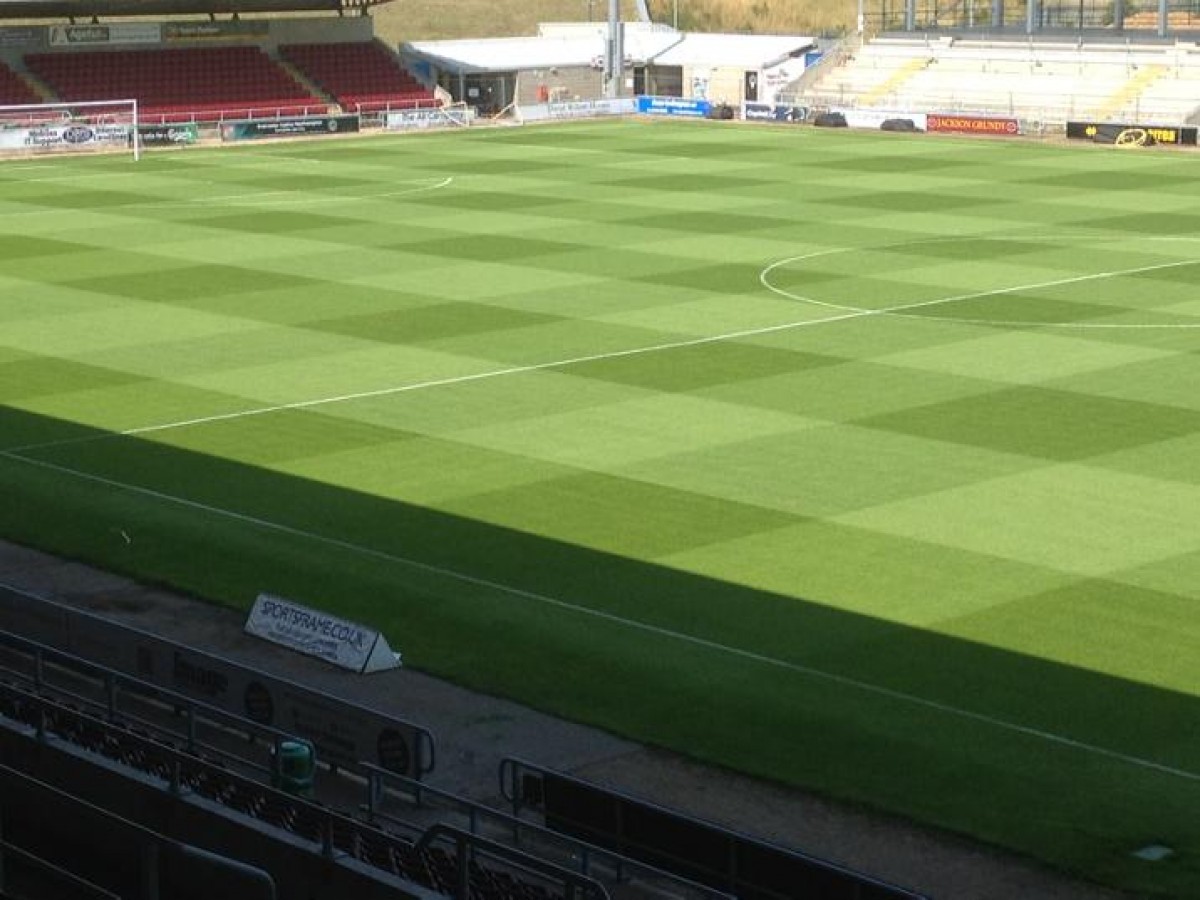