Today is a particularly poignant day for all of us at the Trust – as it marks 25 years to the day that the infamous meeting at the Exeter Rooms took place.

The events of that meeting a quarter of a century ago led to the formation of this Supporters’ Trust, the very first of its kind in existence.

It had all stemmed from a conversation between a group of Cobblers fans at the Brewer’s Arms pub in late November, who were worried with the direction the club was heading.

One of those was the late Brian Lomax, whose growing concern had not been helped by the sight of seeing Bobby Barnes being paid his Christmas wage with a big sack of coins.

“We decided to call a public meeting, which was scheduled for January 2. It wasn’t an ideal day to hold a meeting but it was the only day we could get the room,” Brian told current Trust board member Andy Roberts in his book ‘Thanks for the Wembleys’ – which gives a detailed account of the early days of the Trust.

The room itself had seen better days, but thankfully better days were to come for the football club as a result of what happened in it that night.

From the public floor of the meeting, a former director revealed the full extent of the club’s financial problems, and from there the Supporters’ Trust was formed the following week at the Abington Park Hotel.

Of course, you all know the journey that has stemmed since those events. But behind every course of action the Trust has taken over the last 25 years, there have been a huge number of dedicated volunteers.

There are simply too many to name and thank them all, but we are delighted that just a few of them who helped along the way are joining us today at the Bradford City game to celebrate our anniversary.

It’s also a time to remember those who are no longer with us but played such an important part, including such influential figures as Brian and Phil Frost.

25 years on, and despite a few close shaves, we still have a football club to support.

2016 will certainly go down in history as the most hectic of all of those years, so let’s see what 2017 has in store! And here’s raising a glass for 25 more… 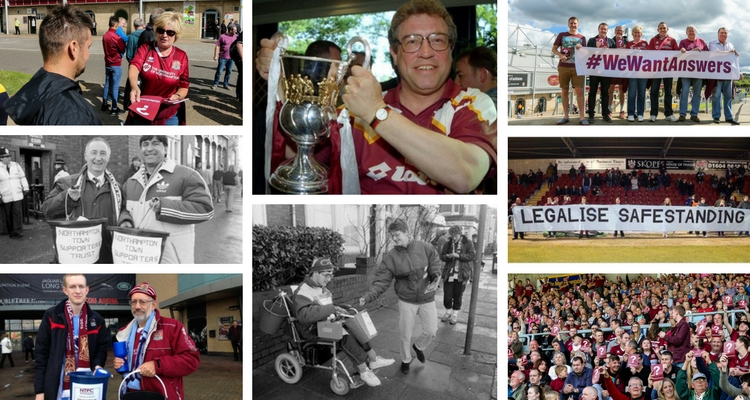